Rain and wind lash Sydney, NSW south coast - Heavy rain and howling winds have battered the NSW south coast and prompted community evac ...
NRL set to consider bigger COVID sanctions - The NRL will consider heavier sanctions for players and officials who breach the bubble, w ...
NT man fined for leaving quarantine early - A man with just one day of mandatory quarantine to go in the Northern Territory has been h ...
Qld prisoner allegedly bit officer's hand - A prison officer will have to undergo blood tests after a prisoner lunged and bit him at a ...
Man shot with crossbow in western Sydney - A 40-year-old man has been wounded in the head, chest and arm after allegedly being attack ...
Campaign to tackle COVID drinking habits - Many Australians have picked up new habits during the coronavirus lockdown with almost one ...
Learner motorcyclists speeding - A motorbike has been seized by police and another has been returned to its registered ow ...
Almost 270 fined for Vic virus breaches - Almost 270 Victorians have been fined for breaching coronavirus restrictions, including a ...
Syd Bunnings staffmember positive to virus - A staff member at Bunnings in Sydney's west has tested positive to COVID-19.
Flooding on NSW south coast will worsen - SES volunteers have responded to more than 200 calls and conducted seven rescues on NSW's ... Tasmanian stargazers have been left deflated after a rare comet lighting up the night sky in other parts of the country and the world failed to make an appearance above the Apple Isle.

Neowise is 5 kilometres wide, travelling at roughly 231,000km/h, and only comes around once every 7000 years.

Countries in the Northern Hemisphere have had the best sight of the comet which is about the same distance from Earth as we are from the sun (151 million kilometres).

Shevill Mathers from Southern Cross Observatory says while the bright comet has given Tassie the cold shoulder, we are currently enjoying close-ups of Jupiter and Saturn, which he argues make for better viewing anyway.

"Many people were hoping to see Neowise but that's not going to be the case. It's heading away from earth fast so it would be nearly impossible to detect with the naked eye."

"However, in the clear sky there's a great view of the two largest planets in our solar system. In the last couple of nights I've taken some really nice pictures of them situated up against the Milky Way."

"The two planets [Jupiter and Saturn] are really much brighter than any other stars. And for anyone getting up before dawn at around 5am or 6am, Venus is also a very bright object in the sky." 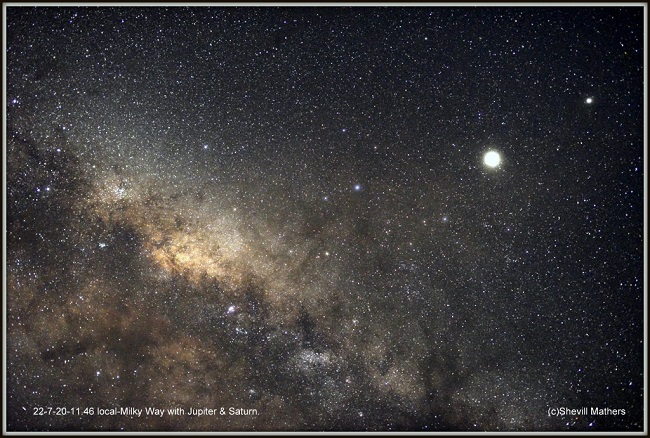