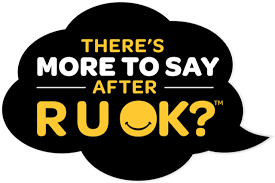 It's RU OK Day, and we're being urged to discuss a sometimes taboo topic, with around 3000 Australians taking their own lives a year, including 80 Tasmanians.

The Stay ChatTY team will visit around 15 local schools and work places across Hobart and Launceston spreading the RUOK Day message.

“There’s more to say after R U OK? By learning what to say next, you can keep the conversation going when someone says they’re not OK, and that conversation could change a life," said SPEAK UP! Stay ChatTY founder Mitch McPherson, who lost his younger brother Ty to suicide in 2013.

“By starting a conversation and commenting on the changes you’ve noticed, you could help that family member, friend or workmate open up."

Suicide Prevention Australia has released a report revealing more than three quarters of frontline services such as Lifeline are reporting increased demand during the pandemic.

Helpline Lifeline also received a record number of calls on Tuesday; 3326 Australians in crisis reached out.

That's despite findings by Victoria's coroners court that there's been no increase in suicide rates in that state, which has Australia's toughest restrictions.