Warning ahead of rock lobster season - On the eve of Tasmania's rock lobster season, two commercial fishermen are in serious ho ...
Border opening support - A report claims the majority of Tasmanians approve of the border opening. Research outf ...
Vic childcare centre closed, 100 isolating - A childcare centre is closed and up to 100 people are self-isolating after a girl connecte ...
Grants row gets ugly - Labor and elements of the Tasmanian media are being lashed over what's being called a da ...
Wastewater report uncovers drug use rise - MAJOR DRUGS FOUND IN WASTEWATER ACROSS AUSTRALIAMETHAMPHETAMINE (also known as ice):* Regi ...
Lauderdale tragedy - An 83-year-old woman is dead after a head-on smash east of Hobart on Wednesday night. ...
Palaszczuk clear winner in election debate - Queensland Premier Annastacia Palaszczuk has won the first leaders' debate after defending ...
Email threats disrupt HSC biology exams - Online threats that disrupted NSW students doing their HSC exams have been labelled " ...
Expeditioners continue to isolate - Thirty-three expeditioners heading south for the Australian Antarctic summer season are ...
UK pushes Australian PM on climate targets - Scott Morrison has been forced to defend his record on climate change after being challeng ...

Race is on to save surviving whales 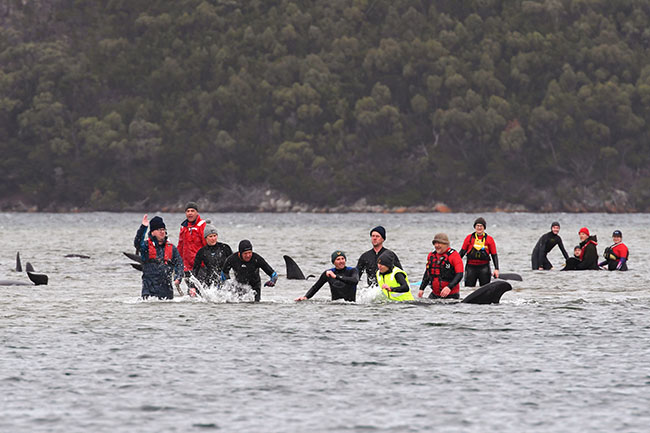 Members of a rescue crew stand with a whales on a sand bar near Strahan, Australia, Tuesday, Sept. 22, 2020. (Brodie Weeding/Pool Photo via AP)

Rescuers in Tasmania are racing to save the few dozen pilot whales still alive following the worst mass stranding on record in Australia.

About 380 of some 460 stranded whales were confirmed dead on Wednesday, although about 50 have been freed from sandbars at Macquarie Harbour on the state's west coast.

Roughly 30 are still fighting for life as rescue efforts enter a fourth day.

"We'll continue working to try and free as many of the remaining live animals as we can," Parks and Wildlife Tasmania manager Nic Deka said.

"There's certainly hope for them but as time goes on they do become more fatigued and their chance of survival reduces."

Wildlife biologist Kris Carlyon said it was definitely the biggest stranding in Tasmania and likely the largest stranding on record in Australia.

It surpasses Tasmania's largest mass stranding of 294 long-finned pilot whales in 1935 at Stanley.

It is also greater than a 1996 event where 320 pilot whales became beached at Dunsborough in Western Australia.

One large group was initially discovered stranded near the harbour's head on Monday, with rescuers on Wednesday morning spotting 200 dead whales a few kilometres away.

Authorities are expected to soon finalise a plan to dispose of hundreds of carcasses.

It is thought the two groups were part of the same pod.

"Pilot whales are incredibly social and maintain strong social bonds with each other and have been known to be found in groups up to 1000," marine scientist Dr Vanessa Pirotta said.

"The ability for them to stick together and follow the leader is something we see often with these animals, which is why it is so heartbreaking."

The freed whales were likely to reform their social group, Dr Carlyon said.