Warning ahead of rock lobster season - On the eve of Tasmania's rock lobster season, two commercial fishermen are in serious ho ...
Border opening support - A report claims the majority of Tasmanians approve of the border opening. Research outf ...
Vic childcare centre closed, 100 isolating - A childcare centre is closed and up to 100 people are self-isolating after a girl connecte ...
Grants row gets ugly - Labor and elements of the Tasmanian media are being lashed over what's being called a da ...
Wastewater report uncovers drug use rise - MAJOR DRUGS FOUND IN WASTEWATER ACROSS AUSTRALIAMETHAMPHETAMINE (also known as ice):* Regi ...
Lauderdale tragedy - An 83-year-old woman is dead after a head-on smash east of Hobart on Wednesday night. ...
Palaszczuk clear winner in election debate - Queensland Premier Annastacia Palaszczuk has won the first leaders' debate after defending ...
Email threats disrupt HSC biology exams - Online threats that disrupted NSW students doing their HSC exams have been labelled " ...
Expeditioners continue to isolate - Thirty-three expeditioners heading south for the Australian Antarctic summer season are ...
UK pushes Australian PM on climate targets - Scott Morrison has been forced to defend his record on climate change after being challeng ... 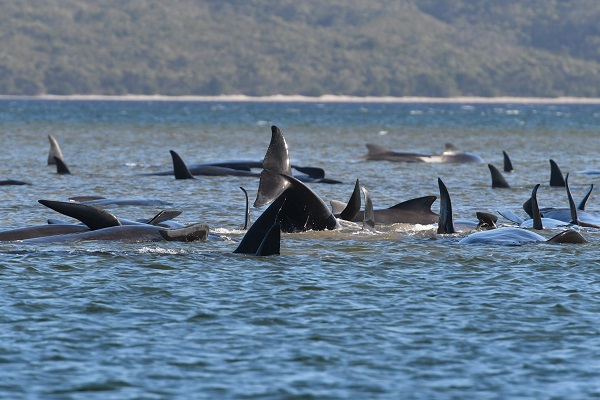 Fresh rescuers are due to arrive at Macquarie Harbour on Tasmania's West Coast on Friday, relieving exhausted crews who've given their all in the state's biggest whale stranding on record.

They've saved around 90 pilot whales, while another 20 still beached are considered a chance of survival after four days of toil.

Biologist Dr Kris Carlyon is optimistic the released whales will be able to regroup and move on.

"We get them into deeper water outside the Gates at Macquarie Harbour, and then they're really on their own," said Dr Carlyon.

"Tracking work in the past has shown that animals that are released individually do reform their pod after a period of time."

"To see that movement and know that they have a chance is an amazing feeling, to have that in amongst so much tragedy and sadness."

Four animals considered too weak to survive were euthanised on Thursday.

Plans are on foot to dump around 350 carcasses now littering the harbour in the Southern Ocean.

Those who didn't survive the mass stranding will pose a major navigational hazard in the harbour once they "bloat and float".

Image courtesy of the Advocate