Seasonal workers in quarantine - A major test of Tasmania's coronavirus measures is underway with 150 foreign fruit picke ...
Testing drive after Vic wastewater find - Health authorities are intent on driving up COVID-19 test numbers in the regional Victoria ...
"Hugely concerning": Huon baffled by fish escapes - Huon Acquaculture says it's yet to determine the cause of a net tear that led to the los ...
Federal police powers to tackle dark web - Federal police and organised crime investigators could soon be able to take over the accou ...
SA looks to continue infection-free streak - South Australia is looking to keep its run of infection-free days going as it considers li ...
UK approves Pfizer COVID-19 vaccine - Britain has become the first western country to approve a COVID-19 vaccine, jumping ahead ...
Qld to review Fraser Island blaze response - The response to a massive Fraser Island bushfire that has destroyed almost half of the wor ...
No charges over SA virus lockdown debacle - No criminal charges will flow from misleading information given to South Australian health ...
Day on the Lawn festival line-up - The Day on the Lawn festival was launched today (Wednesday) at the Royal Botanical Garde ...
Port Arthur massacre film controversy - Distress continues in Tasmania in reaction to news a movie about the Port Arthur gunman ... 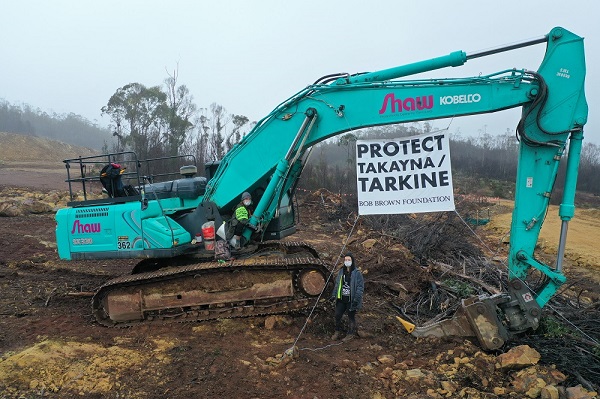 Three of the 12 protesters who swarmed the Riley Creek mine site on the state's West Coast have landed in legal strife.

A 30 year old Glen Huon man and 26 year old Blackstone Heights man were arrested and bailed for future court appearances, while a 19 year old Tinderbox woman will be summonsed for trespassing.

"This company has known the value of this area since before it even started exploration, it has wilfully gone into an area that is precious to many Tasmanians, in fact to people from all around the world that want to see this area protected, this company has brought this conflict to our shores."