Nursing home in spotlight ahead of commission findings - Support's being offered to workers at a northern Tasmanian nursing home engulfed by alle ...
Melissa Caddick remains found on NSW beach - A decomposed foot belonging to alleged Sydney conwoman Melissa Caddick has been found wash ...
Facebook restores news pages to Australia - News has returned to Facebook in Australia with the social media behemoth dropping its ban ...
Leslie Vale house destroyed - Fire caused by an electrical fault in a home office destroyed a Leslie Vale house, south ...
Storms, flooding on NSW north coast - A freight train carrying dangerous goods has derailed and people have been rescued from fl ...
Calls to shut down Ashley Youth Detention Centre - A leading Tasmanian prisoner advocate is calling for Ashley Youth Detention Centre to be ...
New ABS construction figures - The Tasmanian Government says its 'HomeBuilder' stimulus is working, in response to ABS ...
Facebook exploring Canada news agreements - Facebook is exploring potential licensing agreements in the coming year with Canadian medi ...
Tassie's drug challenge - Australians spent nearly $7 billion on the drug ice in a year, according to the latest w ...
Vic to hear 'good news' on restrictions - Premier Daniel Andrews is "very confident" restrictions will ease in Victoria on ... 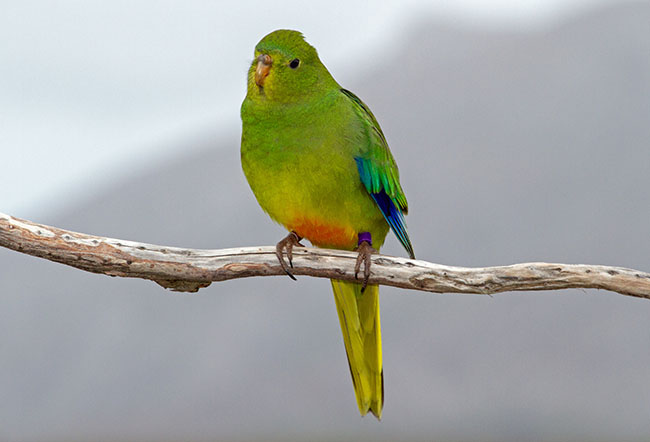 A critically endangered migratory parrot is breeding in Tasmania in record numbers, giving biologists renewed hope for the species' survival.

The orange-bellied parrot makes a perilous journey between southern Australia and the island state's rugged southwest each year.

"This is the highest number of nestlings that has been recorded at Melaleuca since the nest box monitoring began in 1994, and there are some eggs still to hatch," said Dr Shannon Troy, a wildlife biologist from Tasmania's environment department.

"It is also encouraging to see the average clutch size and brood size for individual nests are higher than they have been since 2014.

"We are hopeful there will be a record number of fledglings in the wild this season."

"This is the first orange-bellied parrot breeding recorded at New Harbour since nest boxes were installed a decade ago," Dr Troy said.

"(It is) the first sign of a range expansion of the breeding population since recovery efforts began in the 1980s."

The population is propped up by an intensive breeding program and the release of captive individuals to supplement the birds that return from the mainland.

There were 76 parrots in total at Melaleuca at the beginning of the breeding season, with the high number a possible reason for the birds spreading out.

"This is an important milestone in the long-term recovery effort for this species," Dr Troy said.

"We will keep ... learning from lessons and building upon successes to give the breeding population every chance to continue growing and dispersing."

Up to 50 juvenile captive-bred parrots will be released at Melaleuca from late January to join the flock before it again heads north.

The bird, about 20 centimetres in size at adulthood, is one of only three migratory parrot species.