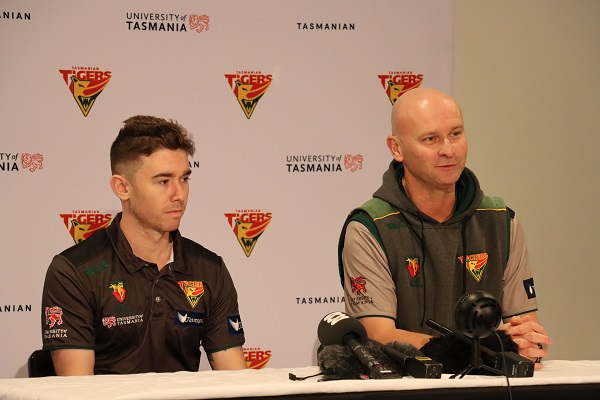 The male cricket squad for the Tasmanian Tigers for the coming season has been named in Hobart.

Reigning David Boon Medallist, Jake Doran (pictured left) has signed a contract extension that will see him remain a Tiger until at least 2025.

"It was always Tassie, yeh, I think I ended up actually having a year left with the boys, so I just wanted to try and lock it in while we are in a good space and working towards some silverware."

A squad of 23 players will represent the Tigers in the 2021-22 Marsh Sheffield Shield and Marsh One-Day Cup competitions.

Head coach Jeff Vaughan (pictured right) has some additions to strengthen some areas that needed improvement.

"Certainly our strategy was top order batting talent and also all-rounder type of players, hence Bradley Hope as an all-rounder from Western Australia and young Nivethan Radhakrishnan who is an opening batsman who is an ambidextrous spin bowler."